So we decided to visit the Internet World expo this year, there were a few good speakers on the cards and our timetable for that week was surprisingly empty…everything felt right!

We actually attended two days of the three day event, Wednesday and Thursday. With an obvious passion for internet marketing and SEO, I spent a lot of time around the Affiliate and Search theatre. Being the first Internet World I have attended there were a couple of points which annoyed me –

– I had planned the day around the seminars, which was probably a mistake. On the first day I had arrived slightly early to make sure I was ready for the first seminar at 10am, as the doors opened at 9.30am I was pretty confident there wouldn’t be a problem. Luckily I had walked straight to the Search theatre because there was already a massive queue and I ended up sitting at the back. The first seminar was planned to finish at 10.30 and I also wanted to see the next seminar starting at 10.45. As it turned out this was not possible…while we were in the theatre another lengthy queue had formed which exceeded the seating count.
This was not just a surprise to me as there were a handful of people in a similar situation wondering what the hell had gone on.

– No Seat? No Way!
As many of the theatres had a limited seating capacity (~60 seats) there were often people turned away which is understandable. However the theatres had two fairly large doorways which could have been used for standing spectators…people that may have been a little too late to the party but still wanted to pick up some advice. In the majority of seminars I attended, people trying to view from outside were shunned away and often the curtains were drawn in-front of them. Surely its not harming anyone having the curtain open so they can participate?

– Organisation and Preferential Treatment
Again, its a queueing related rant so bear with me now. By the Thursday I had become pretty good at queueing for the seminars, often arriving up to an hour early just so I would get a good seat. Obviously not everyone could do this so it was usually a case of 100+ people queueing for ~60 seats. The event had two types of tickets, the normal Free tickets, and an advanced track paid ticket. The problem was that the paid ticket too precedence over the normal ticket under any circumstance. For example I witnessed a man and wife queueing for up to an hour, and 5 minutes before the seminar started they were told they would be the last people in and anyone in the queue after them would not get a seat. The problem came as we were filtering into the theatre, 2 paid guests arrived and were ushered in ahead of everyone else. This caused 2 seats to be occupied, and subsequently the man and wife were sent away. Surely their should be some restrictions on paid guests too? 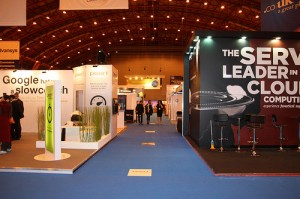 On the bright side I still had a really good time, even if it was just to find out what other companies in the industry are doing. There were a lot of SEO companies in attendance so speaking to them about their tactics was very interesting. Also seeing what tactics were suggested by seminar speakers was very reassuring. I may not have picked up any new information but it shows me what I have been doing is right! Its also showed me I am not charging my clients enough.